“Icon” – a term that is so overused as to be virtually meaningless. You can hear television presenters refer to an iconic singer’ – i.e. they had one Top Ten hit in 1986 – or an ‘iconic building’ as in that it was the local town planner’s revenge on society.

But Brian Holdsworth, the Membership Secretary of the  6/80 & MO Oxford & Cowley Club, is  the owner of a true automotive icon, one that enjoyed a production run of 56 years and is a vital aspect of post-war Indian popular culture. It is, of course, the Hindustan Ambassador.

Hindustan Motors was established in 1942 in collaboration with the Nuffield, and their first vehicle was Morris Ten-based Landmaster of 1942. Six years later their cars were manufactured, as opposed to assembled, and the company went on to build the Oxford MO derived Hindustan 14 and the  Minor aka the “Baby Hindustan”.

The Ambassador was marketed as being ‘a cut above the rest’, and the original versions were powered by the MO’s  1,476 cc side valve engine, replaced by the 1.5-litre B-series unit in 1960.

By the time of the facelifted Mk. II in 1962 the waiting list was said to be five years.  The Mk. III of 1975 could be specified with an optional floor gear lever, servo assistance for the brakes, windscreen washers and separate front seats.

By 1979 the Ambassador Mk. IV gained the frontal appearance it would retain until the end of production. But by the early 1980s,,the Indian Government’s long-term policy of protecting the domestic motor industry was becoming liberalised, and the advent of the Suzuki-based  Maruti 800 DX marked a radical change in the nation’s automotive landscape.

However, the Ambassador would remain in production until May of 2014 and was for many years a staple of taxi-operators, police forces and government departments throughout the country.

A handful of British imports commenced in 1991, and although prices were a very reasonable  £7,150, sales remained extremely limited. Another problem, as Brian notes, was that the rust prevention varied from ‘limited’ to ‘virtually non-existent’. N 754 PVL is his second Hindustan – ‘I bought my first one in 1996, but I only owned it for a year as the corrosion was terrible!’

The Holdsworth Ambassador is 23 years old, and it looks resplendent in “Bengal Racing Green”; it has also been rust proofed from new. As with all later models, power is from a 1.8-litre Isuzu engine, and there is five-speed transmission, plus a  heater to cope with UK weather conditions. However,  most of the detailing is resolutely 1950s, down to the layout for the minor controls.

Brian praises the Hindustan’s ‘comfort and space’, while further advantages are the Ambassador’s innate dignity and sense of timelessness.  It may hail from the year when Oasis sang Don’t Look Back in Anger – but it belongs to the worlds of both Shammi Kapoor musicals and  Alma Cogan records. 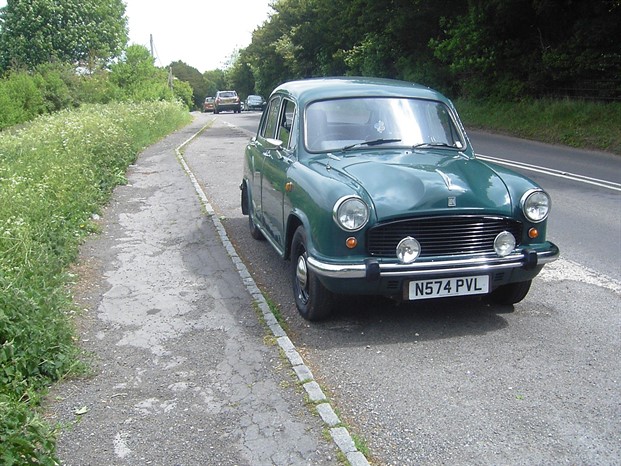